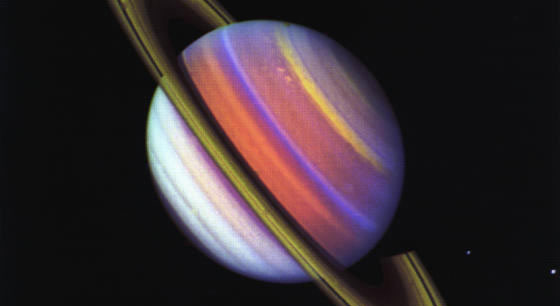 The two Saturn encounters increased our knowledge and altered our understanding of Saturn. The extended, close-range observations provided high-resolution data far different from the picture assembled during centuries of Earth-based studies.

Here is a summary of scientific findings by the two Voyagers at Saturn: SATURN Saturn's atmosphere is almost entirely hydrogen and helium. Voyager 1 found that about 7 percent of the volume of Saturn's upper atmosphere is helium (compared with 11 percent of Jupiter's atmosphere), while almost all the rest is hydrogen. Since Saturn's internal helium abundance was expected to be the same as Jupiter's and the Sun's, the lower abundance of helium in the upper atmosphere may imply that the heavier helium may be slowly sinking through Saturn's hydrogen; that might explain the excess heat that Saturn radiates over energy it receives from the Sun. (Saturn is the only planet less dense than water. In the unlikely event that a lake could be found large enough, Saturn would float in it.)

Subdued contrasts and color differences on Saturn could be a result of more horizontal mixing or less production of localized colors than in Jupiter's atmosphere. While Voyager 1 saw few markings, Voyager 2's more sensitive cameras saw many: Long-lived ovals, tilted features in east-west shear zones, and others similar to, but generally smaller than, on Jupiter.

Winds blow at high speeds in Saturn. Near the equator, the Voyagers measured winds about 500 meters a second (1,100 miles an hour). The wind blows mostly in an easterly direction. Strongest winds are found near the equator, and velocity falls off uniformly at higher latitudes. At latitudes greater than 35 degrees, winds alternate east and west as latitude increases. Marked dominance of eastward jet streams indicates that winds are not confined to the cloud layer, but must extend inward at least 2,000 kilometers (1,200 miles). Furthermore, measurements by Voyager 2 showing a striking north-south symmetry that leads some scientists to suggest the winds may extend from north to south through the interior of the planet.

The Voyagers found aurora-like ultraviolet emissions of hydrogen at mid-latitudes in the atmosphere, and auroras at polar latitudes (above 65 degrees). The high-level auroral activity may lead to formation of complex hydrocarbon molecules that are carried toward the equator. The mid-latitude auroras, which occur only in sunlit regions, remain a puzzle, since bombardment by electrons and ions, known to cause auroras on Earth, occurs primarily at high latitudes.

Both Voyagers measured the rotation of Saturn (the length of a day) at 10 hours, 39 minutes, 24 seconds.