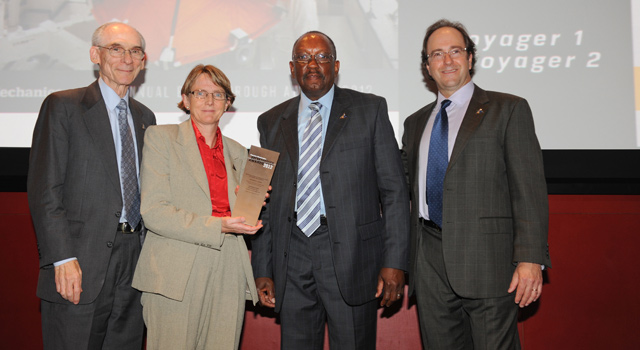 On Oct. 4, 2012, representatives from NASA's Voyager mission received a Breakthrough Award from Popular Mechanics at a ceremony in New York. The awards are given for projects that dramatically advance the disciplines of technology, space exploration and other fields. The two Voyager spacecraft have been traveling through our solar system for 35 years and are still sending back data as they draw close to crossing into interstellar space, which is the space between stars.

"We're honored that our veteran Voyager spacecraft are being recognized as innovative," said Suzanne Dodd, Voyager's project manager, based at NASA's Jet Propulsion Laboratory, Pasadena, Calif. "After showing us many firsts at Jupiter, Saturn, Uranus and Neptune, they are still sending us first-of-its-kind data about the exotic, far reaches of our solar system. We can't wait to hear from the two Voyagers what it's like in interstellar space."

The Voyager spacecraft were built by JPL, which continues to operate both. JPL is a division of the California Institute of Technology in Pasadena. The Voyager missions are a part of the NASA Heliophysics System Observatory, sponsored by the Heliophysics Division of the Science Mission Directorate in Washington. For more information about the Voyager spacecraft, visit: http://www.nasa.gov/voyager and https://voyager.jpl.nasa.gov.