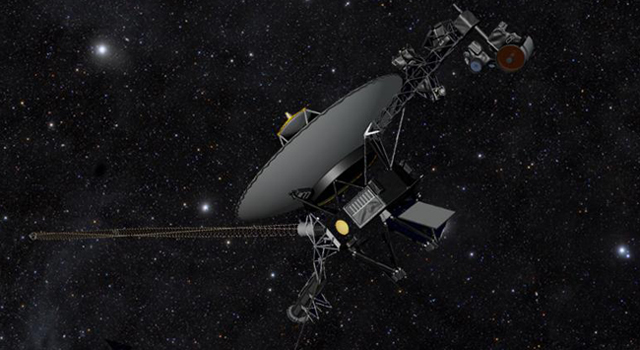 This artist's concept shows NASA's Voyager spacecraft against a field of stars in the darkness of space. The two Voyager spacecraft are traveling farther and farther away from Earth, on a journey to interstellar space, and will eventually circle around the center of the Milky Way galaxy. Image credit:NASA/JPL-Caltech
› Full image and caption

A newly published paper argues that NASA's Voyager 1 spacecraft has already entered interstellar space. The model described in the paper is new and different from other models used so far to explain the data the spacecraft has been sending back from more than 11 billion miles (18 billion kilometers) away from our sun.

The fine-scale magnetic connection model will become part of the discussion among scientists as they try to reconcile what may be happening on a fine scale with what happens on a larger scale.

The Voyager 1 spacecraft is exploring a region no spacecraft has ever been to before. We will continue to look for any further developments over the coming months and years as Voyager explores an uncharted frontier."