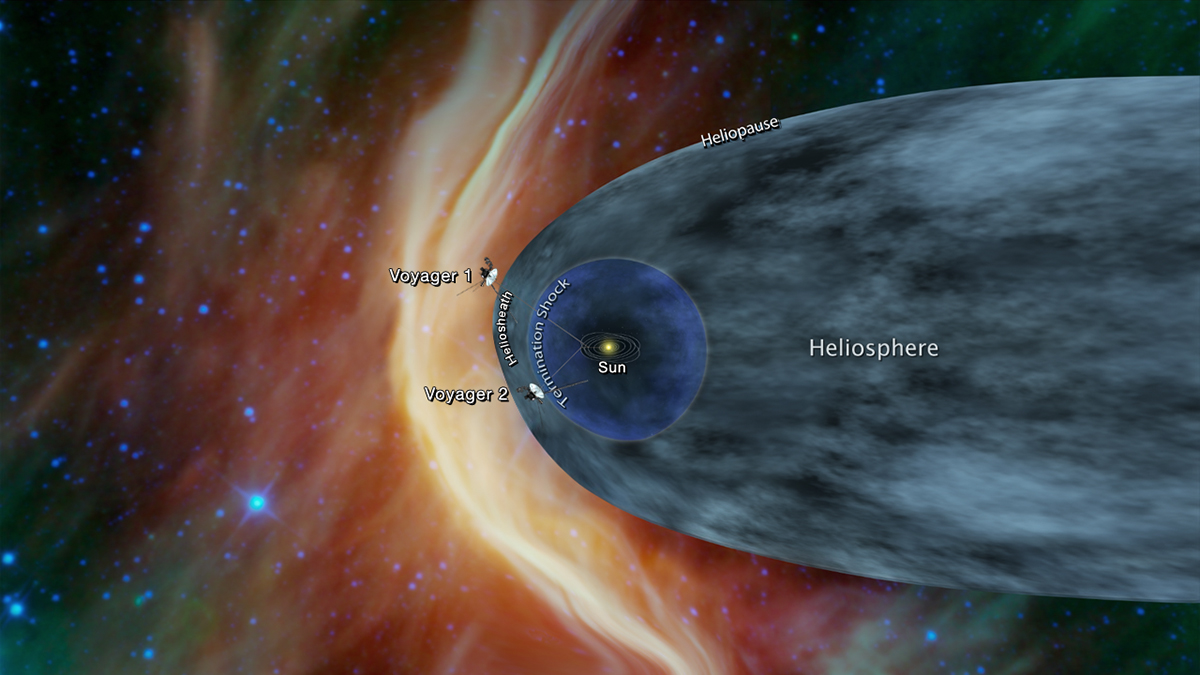 NASA's Voyager 2 probe, currently on a journey toward interstellar space, has detected an increase in cosmic rays that originate outside our solar system. Launched in 1977, Voyager 2 is a little less than 11 billion miles (about 17.7 billion kilometers) from Earth, or more than 118 times the distance from Earth to the Sun.

Since 2007 the probe has been traveling through the outermost layer of the heliosphere -- the vast bubble around the Sun and the planets dominated by solar material and magnetic fields. Voyager scientists have been watching for the spacecraft to reach the outer boundary of the heliosphere, known as the heliopause. Once Voyager 2 exits the heliosphere, it will become the second human-made object, after Voyager 1, to enter interstellar space.

Since late August, the Cosmic Ray Subsystem instrument on Voyager 2 has measured about a 5 percent increase in the rate of cosmic rays hitting the spacecraft compared to early August. The probe's Low-Energy Charged Particle instrument has detected a similar increase in higher-energy cosmic rays.

In May 2012, Voyager 1 experienced an increase in the rate of cosmic rays similar to what Voyager 2 is now detecting. That was about three months before Voyager 1 crossed the heliopause and entered interstellar space.

However, Voyager team members note that the increase in cosmic rays is not a definitive sign that the probe is about to cross the heliopause. Voyager 2 is in a different location in the heliosheath -- the outer region of the heliosphere -- than Voyager 1 had been, and possible differences in these locations means Voyager 2 may experience a different exit timeline than Voyager 1.

The fact that Voyager 2 may be approaching the heliopause six years after Voyager 1 is also relevant, because the heliopause moves inward and outward during the Sun's 11-year activity cycle. Solar activity refers to emissions from the Sun, including solar flares and eruptions of material called coronal mass ejections. During the 11-year solar cycle, the Sun reaches both a maximum and a minimum level of activity.

"We're seeing a change in the environment around Voyager 2, there's no doubt about that," said Voyager Project Scientist Ed Stone, based at Caltech in Pasadena. "We're going to learn a lot in the coming months, but we still don't know when we'll reach the heliopause. We're not there yet -- that's one thing I can say with confidence."

The Voyager spacecraft were built by NASA's Jet Propulsion Laboratory in Pasadena, California, which continues to operate both. JPL is a division of Caltech. The Voyager missions are a part of the NASA Heliophysics System Observatory, managed by the Heliophysics Division of the Science Mission Directorate in Washington.