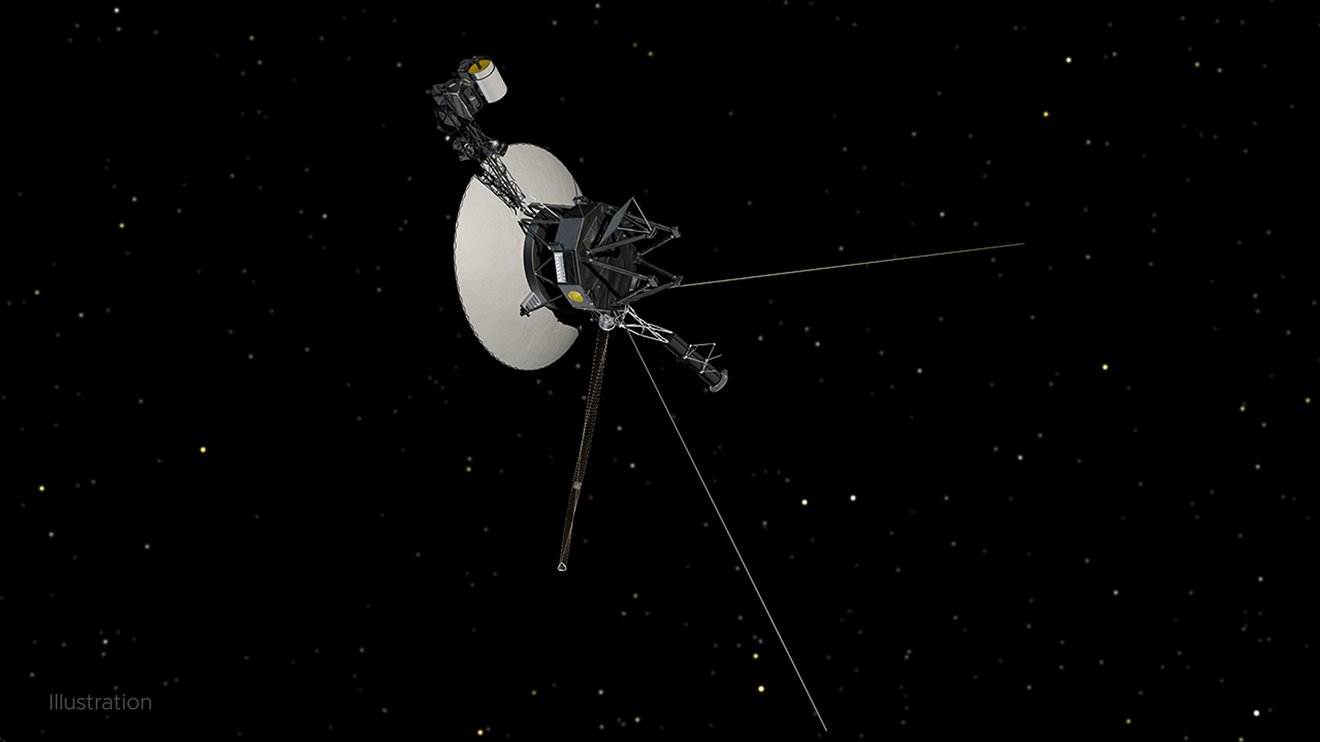 NASA's Voyager 1 spacecraft, shown in this illustration, has been exploring our solar system since 1977, along with its twin, Voyager 2. Credit: NASA/JPL-Caltech

While the spacecraft continues to return science data and otherwise operate as normal, the mission team is searching for the source of a system data issue.

The engineering team with NASA's Voyager 1 spacecraft is trying to solve a mystery: The interstellar explorer is operating normally, receiving and executing commands from Earth, along with gathering and returning science data. But readouts from the probe's attitude articulation and control system (AACS) don't reflect what's actually happening onboard.

The AACS controls the 45-year-old spacecraft's orientation. Among other tasks, it keeps Voyager 1's high-gain antenna pointed precisely at Earth, enabling it to send data home. All signs suggest the AACS is still working, but the telemetry data it's returning is invalid. For instance, the data may appear to be randomly generated, or does not reflect any possible state the AACS could be in.

The issue hasn't triggered any onboard fault protection systems, which are designed to put the spacecraft into “safe mode” – a state where only essential operations are carried out, giving engineers time to diagnose an issue. Voyager 1's signal hasn't weakened, either, which suggests the high-gain antenna remains in its prescribed orientation with Earth.

The team will continue to monitor the signal closely as they continue to determine whether the invalid data is coming directly from the AACS or another system involved in producing and sending telemetry data. Until the nature of the issue is better understood, the team cannot anticipate whether this might affect how long the spacecraft can collect and transmit science data.

Voyager 1 is currently 14.5 billion miles (23.3 billion kilometers) from Earth, and it takes light 20 hours and 33 minutes to travel that difference. That means it takes roughly two days to send a message to Voyager 1 and get a response – a delay the mission team is well accustomed to.

“A mystery like this is sort of par for the course at this stage of the Voyager mission,” said Suzanne Dodd, project manager for Voyager 1 and 2 at NASA's Jet Propulsion Laboratory in Southern California. “The spacecraft are both almost 45 years old, which is far beyond what the mission planners anticipated. We're also in interstellar space – a high-radiation environment that no spacecraft have flown in before. So there are some big challenges for the engineering team. But I think if there's a way to solve this issue with the AACS, our team will find it.”

It's possible the team may not find the source of the anomaly and will instead adapt to it, Dodd said. If they do find the source, they may be able to solve the issue through software changes or potentially by using one of the spacecraft's redundant hardware systems.

It wouldn't be the first time the Voyager team has relied on backup hardware: In 2017, Voyager 1's primary thrusters showed signs of degradation, so engineers switched to another set of thrusters that had originally been used during the spacecraft's planetary encounters. Those thrusters worked, despite having been unused for 37 years.

Launched in 1977, both Voyagers have operated far longer than mission planners expected, and are the only spacecraft to collect data in interstellar space. The information they provide from this region has helped drive a deeper understanding of the heliosphere, the diffuse barrier the Sun creates around the planets in our solar system.

Each spacecraft produces about 4 fewer watts of electrical power a year, limiting the number of systems the craft can run. The mission engineering team has switched off various subsystems and heaters in order to reserve power for science instruments and critical systems. No science instruments have been turned off yet as a result of the diminishing power, and the Voyager team is working to keep the two spacecraft operating and returning unique science beyond 2025.

While the engineers continue to work at solving the mystery that Voyager 1 has presented them, the mission's scientists will continue to make the most of the data coming down from the spacecraft's unique vantage point.

The Voyager spacecraft were built by JPL, which continues to operate both. JPL is a division of Caltech in Pasadena. The Voyager missions are a part of the NASA Heliophysics System Observatory, sponsored by the Heliophysics Division of the Science Mission Directorate in Washington.