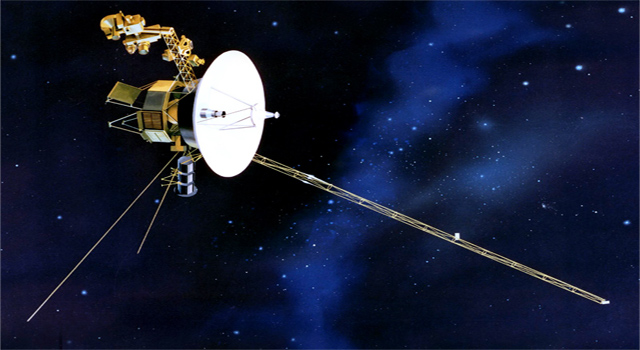 In a dark, cold, vacant neighborhood near the very edge of our solar system, the Voyager 1 spacecraft is set to break another record and become the explorer that has traveled farthest from home.

At approximately 2:10 p.m. Pacific time on February 17, 1998, Voyager 1, launched more than two decades ago, will cruise beyond the Pioneer 10 spacecraft and become the most distant human-created object in space at 10.4 billion kilometers (6.5 billion miles.) The two are headed in almost opposite directions away from the Sun. As with other spacecraft traveling past the orbit of Mars, both Voyager and Pioneer derive their electrical power from onboard nuclear batteries.

"For 25 years, the Pioneer 10 spacecraft led the way, pressing the frontiers of exploration, and now the baton is being passed from Pioneer 10 to Voyager 1 to continue exploring where no one has gone before," said Dr. Edward C. Stone, Voyager project scientist and director of NASA's Jet Propulsion Laboratory.

"At almost 70 times farther from the Sun than the Earth, Voyager 1 is at the very edge of the Solar System. The Sun there is only 1/5,000th as bright as here on Earth -- so it is extremely cold and there is very little solar energy to keep the spacecraft warm or to provide electrical power. The reason we can continue to operate at such great distances from the Sun is because we have radioisotope thermal electric generators (RTGs) on the spacecraft that create electricity and keep the spacecraft operating," Stone said. "The fact that the spacecraft is still returning data is a remarkable technical achievement."

Then, because its trajectory was designed to fly close to Saturn's large moon Titan, Voyager 1's path was bent northward by Saturn's gravity, sending the spacecraft out of the ecliptic plane - the plane in which all the planets except Pluto orbit the Sun.

"The Voyager mission today presents an unequaled technical challenge. The spacecraft are now so far from home that it takes nine hours and 36 minutes for a radio signal traveling at the speed of light to reach Earth,"said Ed B. Massey, project manager for the Voyager Interstellar Mission. "That signal, produced by a 20 watt radio transmitter, is so faint that the amount of power reaching our antennas is 20 billion times smaller than the power of a digital watch battery."

Having completed their planetary explorations, Voyager 1 and its twin, Voyager 2, are studying the environment of space in the outer solar system. Although beyond the orbits of all the planets, the spacecraft still are well within the boundary of the Sun's magnetic field, called the heliosphere. Science instruments on both spacecraft sense signals that scientists believe are coming from the outermost edge of the heliosphere, known as the heliopause.

The heliosphere results from the Sun emitting a steady flow of electrically charged particles called the solar wind. As the solar wind expands supersonically into space in all directions, it creates a magnetized bubble -- the heliosphere -- around the Sun. Eventually, the solar wind encounters the electrically charged particles and magnetic field in the interstellar gas. In this zone the solar wind abruptly slows down from supersonic to subsonic speed, creating a termination shock. Before the spacecraft travel beyond the heliopause into interstellar space, they will pass through this termination shock.

"The data coming back from Voyager now suggest that we may pass through the termination shock in the next three to five years," Stone said. "If that's the case, then one would expect that within 10 years or so we would actually be very close to penetrating the heliopause itself and entering into interstellar space for the first time."

Reaching the termination shock and heliopause will be major milestones for the mission because no spacecraft have been there before and the Voyagers will gather the first direct evidence of their structure. Encountering the termination shock and heliopause has been a long-sought goal for many space physicists, and exactly where these two boundaries are located and what they are like still remains a mystery.

Science data are returned to Earth in real-time to the 34- meter Deep Space Network (DSN) antennas located in California, Australia and Spain. Both spacecraft have enough electricity and attitude control propellant to continue operating until about 2020, when electrical power produced by the RTGs will no longer support science instrument operation. At that time, Voyager 1 will be almost 150 times farther from the Sun than the Earth -- more than 20 billion kilometers (almost 14 billion miles) away.

JPL, a division of the California Institute of Technology, manages the Voyager Interstellar Mission for NASA's Office of Space Science, Washington, D. C.