PASADENA, Calif. – The 33-year odyssey of NASA's Voyager 1 spacecraft has reached a distant point at the edge of our solar system where there is no outward motion of solar wind. 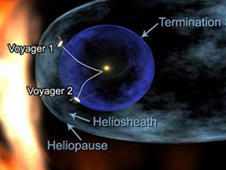 Now hurtling toward interstellar space some 17.4 billion kilometers (10.8 billion miles) from the sun, Voyager 1 has crossed into an area where the velocity of the hot ionized gas, or plasma, emanating directly outward from the sun has slowed to zero. Scientists suspect the solar wind has been turned sideways by the pressure from the interstellar wind in the region between stars.

The event is a major milestone in Voyager 1's passage through the heliosheath, the turbulent outer shell of the sun's sphere of influence, and the spacecraft's upcoming departure from our solar system.

"The solar wind has turned the corner," said Ed Stone, Voyager project scientist based at the California Institute of Technology in Pasadena, Calif. "Voyager 1 is getting close to interstellar space."

Our sun gives off a stream of charged particles that form a bubble known as the heliosphere around our solar system. The solar wind travels at supersonic speed until it crosses a shockwave called the termination shock. At this point, the solar wind dramatically slows down and heats up in the heliosheath.

Launched on Sept. 5, 1977, Voyager 1 crossed the termination shock in December 2004 into the heliosheath. Scientists have used data from Voyager 1's Low-Energy Charged Particle Instrument to deduce the solar wind's velocity. When the speed of the charged particles hitting the outward face of Voyager 1 matched the spacecraft's speed, researchers knew that the net outward speed of the solar wind was zero. This occurred in June, when Voyager 1 was about 17 billion kilometers (10.6 billion miles) from the sun.

Because the velocities can fluctuate, scientists watched four more monthly readings before they were convinced the solar wind's outward speed actually had slowed to zero. Analysis of the data shows the velocity of the solar wind has steadily slowed at a rate of about 20 kilometers per second each year (45,000 mph each year) since August 2007, when the solar wind was speeding outward at about 60 kilometers per second (130,000 mph). The outward speed has remained at zero since June.

The results were presented today at the American Geophysical Union meeting in San Francisco.

"When I realized that we were getting solid zeroes, I was amazed," said Rob Decker, a Voyager Low-Energy Charged Particle Instrument co-investigator and senior staff scientist at the Johns Hopkins University Applied Physics Laboratory in Laurel, Md. "Here was Voyager, a spacecraft that has been a workhorse for 33 years, showing us something completely new again."

"In science, there is nothing like a reality check to shake things up, and Voyager 1 provided that with hard facts," said Tom Krimigis, principal investigator on the Low-Energy Charged Particle Instrument, who is based at the Applied Physics Laboratory and the Academy of Athens, Greece. "Once again, we face the predicament of redoing our models."

A sister spacecraft, Voyager 2, was launched in Aug. 20, 1977 and has reached a position 14.2 billion kilometers (8.8 billion miles) from the sun. Both spacecraft have been traveling along different trajectories and at different speeds. Voyager 1 is traveling faster, at a speed of about 17 kilometers per second (38,000 mph), compared to Voyager 2's velocity of 15 kilometers per second (35,000 mph). In the next few years, scientists expect Voyager 2 to encounter the same kind of phenomenon as Voyager 1.

The Voyagers were built by NASA's Jet Propulsion Laboratory in Pasadena, Calif., which continues to operate both spacecraft. For more information about the Voyager spacecraft, visit: http://www.nasa.gov/voyager . JPL is a division of the California Institute of Technology in Pasadena.