As NASA's Voyager 2 spacecraft made the only close approach to date of our mysterious seventh planet Uranus 25 years ago, Project Scientist Ed Stone and the Voyager team gathered at NASA's Jet Propulsion Laboratory, Pasadena, Calif., to pore over the data coming in. 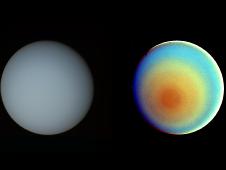 These two pictures of Uranus -- one in true color (left) and the other in false color -- were compiled from images returned Jan. 17, 1986, by the narrow-angle camera of Voyager 2. Image credit: NASA/JPL  › larger image

Images of the small, icy Uranus moon Miranda were particularly surprising. Since small moons tend to cool and freeze over rapidly after their formation, scientists had expected a boring, ancient surface, pockmarked by crater-upon-weathered-crater. Instead they saw grooved terrain with linear valleys and ridges cutting through the older terrain and sometimes coming together in chevron shapes. They also saw dramatic fault scarps, or cliffs. All of this indicated that periods of tectonic and thermal activity had rocked Miranda's surface in the past.

The scientists were also shocked by data showing that Uranus's magnetic north and south poles were not closely aligned with the north-south axis of the planet's rotation. Instead, the planet's magnetic field poles were closer to the Uranian equator. This suggested that the material flows in the planet's interior that are generating the magnetic field are closer to the surface of Uranus than the flows inside Earth, Jupiter and Saturn are to their respective surfaces.

"Voyager 2's visit to Uranus expanded our knowledge of the unexpected diversity of bodies that share the solar system with Earth," said Stone, who is based at the California Institute of Technology in Pasadena. "Even though similar in many ways, the worlds we encounter can still surprise us." 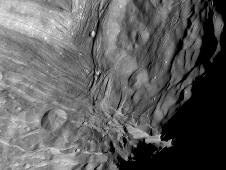 Before Voyager 2's visit, scientists had to learn about Uranus by using Earth-based and airborne telescopes. By observing dips in starlight as a star passed behind Uranus, scientists knew Uranus had nine narrow rings. But it wasn't until the Voyager 2 flyby that scientists were able to capture for the first time images of the rings and the tiny shepherding moons that sculpted them. Unlike Saturn's icy rings, they found Uranus' rings to be dark gray, reflecting only a few percent of the incident sunlight.

Scientists had also determined an average temperature for Uranus (59 Kelvin, or minus 350 degrees Fahrenheit) before this encounter, but the distribution of that temperature came as a surprise. Voyager showed there was heat transport from pole to pole in Uranus' atmosphere that maintained the same temperature at both poles, even though the sun was shining directly for decades on one pole and not the other. 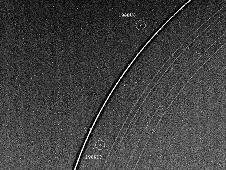 Voyager 2 has discovered two "shepherd" satellites associated with the rings of Uranus. The two moons -- designated 1986U7 and 1986U8 -- are seen here on either side of the bright epsilon ring; all nine of the known Uranian rings are visible. Image credit: NASA/JPL  › larger image

By the end of the Uranus encounter and science analysis, data from Voyager 2 enabled the discovery of 11 new moons and two new rings, and generated dozens of science papers about the quirky seventh planet.

"The Uranus encounter was one of a kind," said Suzanne Dodd, Voyager project manager, based at JPL. "Voyager 2 was healthy and durable enough to make it to Uranus and then to Neptune. Currently both Voyager spacecraft are on the cusp of leaving the sun's sphere of influence and once again blazing a trail of scientific discovery."

The Voyagers were built by NASA's Jet Propulsion Laboratory in Pasadena, Calif., which continues to operate both spacecraft. For more information about the Voyager spacecraft, visit: http://www.nasa.gov/voyager . JPL is a division of the California Institute of Technology in Pasadena.