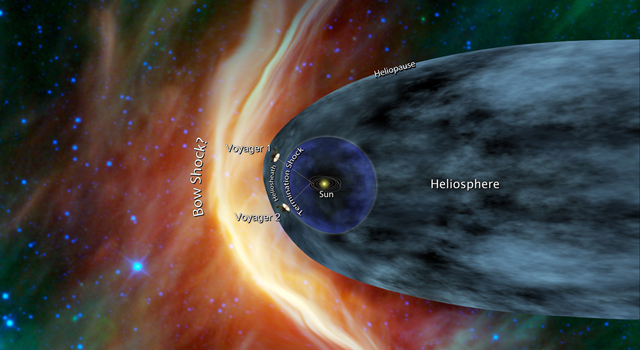 This artist's concept shows NASA's two Voyager spacecraft exploring a turbulent region of space known as the heliosheath, the outer shell of the bubble of charged particles around our sun. Image credit: NASA/JPL-Caltech  › larger image

Scientists analyzing recent data from NASA's Voyager and Cassini spacecraft have calculated that Voyager 1 could cross over into the frontier of interstellar space at any time and much earlier than previously thought. The findings are detailed in this week's issue of the journal Nature.

Data from Voyager's low-energy charged particle instrument, first reported in December 2010, have indicated that the outward speed of the charged particles streaming from the sun has slowed to zero. The stagnation of this solar wind has continued through at least February 2011, marking a thick, previously unpredicted "transition zone" at the edge of our solar system.

"There is one time we are going to cross that frontier, and this is the first sign it is upon us," said Tom Krimigis, prinicipal investigator for Voyager's low-energy charged particle instrument and Cassini's magnetospheric imaging instrument, based at the Johns Hopkins University Applied Physics Laboratory in Laurel, Md.

Krimigis and colleagues combined the new Voyager data with previously unpublished measurements from the ion and neutral camera on Cassini's magnetospheric imaging instrument. The Cassini instrument collects data on neutral atoms streaming into our solar system from the outside.

"These calculations show we're getting close, but how close? That's what we don't know, but Voyager 1 speeds outward a billion miles every three years, so we may not have long to wait," said Ed Stone, Voyager project scientist, based at the California Institute of Technology in Pasadena.

Launched in 1977, the Voyager twin spacecraft have been on a 33-year journey. They are humanity's farthest working deep space sentinels enroute to reach the edge of interstellar space. The Voyagers were built by NASA's Jet Propulsion Laboratory in Pasadena, Calif., which continues to operate both spacecraft. The Voyager missions are a part of the NASA Heliophysics System Observatory, sponsored by the Heliophysics Division of NASA's Science Mission Directorate in Washington. JPL is managed for NASA by Caltech.