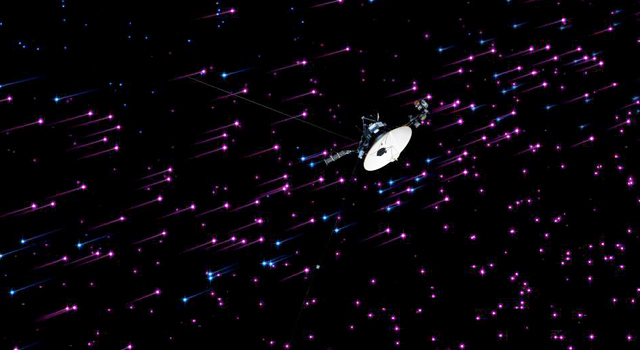 This still image and set of animations show NASA's Voyager 1 spacecraft exploring a new region in our solar system called the "magnetic highway." In this region, the sun's magnetic field lines are connected to interstellar magnetic field lines, allowing particles from inside the heliosphere to zip away and particles from interstellar space to zoom in. Image credit: NASA/JPL-Caltech  › larger image

PASADENA, Calif. -- NASA's Voyager 1 spacecraft has entered a new region at the far reaches of our solar system that scientists feel is the final area the spacecraft has to cross before reaching interstellar space.

The Voyager team infers this region is still inside our solar bubble because the direction of the magnetic field lines has not changed. The direction of these magnetic field lines is predicted to change when Voyager breaks through to interstellar space. The new results were described at the American Geophysical Union meeting in San Francisco on Monday.

"Although Voyager 1 still is inside the sun's environment, we now can taste what it's like on the outside because the particles are zipping in and out on this magnetic highway," said Edward Stone, Voyager project scientist based at the California Institute of Technology, Pasadena. "We believe this is the last leg of our journey to interstellar space. Our best guess is it's likely just a few months to a couple years away. The new region isn't what we expected, but we've come to expect the unexpected from Voyager."

Since December 2004, when Voyager 1 crossed a point in space called the termination shock, the spacecraft has been exploring the heliosphere's outer layer, called the heliosheath. In this region, the stream of charged particles from the sun, known as the solar wind, abruptly slowed down from supersonic speeds and became turbulent. Voyager 1's environment was consistent for about five and a half years. The spacecraft then detected that the outward speed of the solar wind slowed to zero.

The intensity of the magnetic field also began to increase at that time.

Voyager data from two onboard instruments that measure charged particles showed the spacecraft first entered this magnetic highway region on July 28, 2012. The region ebbed away and flowed toward Voyager 1 several times. The spacecraft entered the region again Aug. 25 and the environment has been stable since.

"If we were judging by the charged particle data alone, I would have thought we were outside the heliosphere," said Stamatios Krimigis, principal investigator of the low-energy charged particle instrument, based at the Johns Hopkins Applied Physics Laboratory, Laurel, Md. "But we need to look at what all the instruments are telling us and only time will tell whether our interpretations about this frontier are correct."

"We are in a magnetic region unlike any we've been in before -- about 10 times more intense than before the termination shock -- but the magnetic field data show no indication we're in interstellar space," said Leonard Burlaga, a Voyager magnetometer team member based at NASA's Goddard Space Flight Center in Greenbelt, Md. "The magnetic field data turned out to be the key to pinpointing when we crossed the termination shock. And we expect these data will tell us when we first reach interstellar space."

Voyager 1 and 2 were launched 16 days apart in 1977. At least one of the spacecraft has visited Jupiter, Saturn, Uranus and Neptune. Voyager 1 is the most distant human-made object, about 11 billion miles (18 billion kilometers) away from the sun. The signal from Voyager 1 takes approximately 17 hours to travel to Earth. Voyager 2, the longest continuously operated spacecraft, is about 9 billion miles (15 billion kilometers) away from our sun. While Voyager 2 has seen changes similar to those seen by Voyager 1, the changes are much more gradual. Scientists do not think Voyager 2 has reached the magnetic highway.