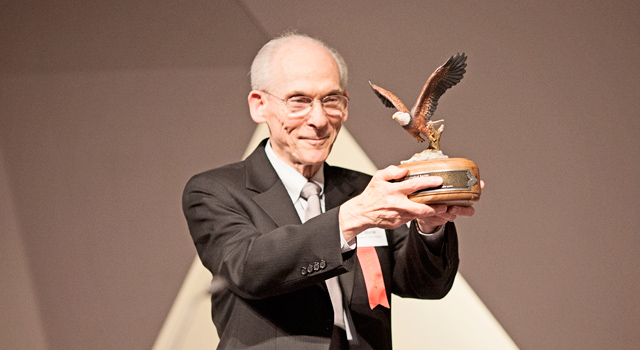 Ed Stone, project scientist of NASA’s Voyager mission since 1972, and former director of NASA's Jet Propulsion Laboratory, Pasadena, California, was honored with a lifetime achievement award on Wednesday from the American Astronautical Society. Stone received this honor “for sustained and extraordinary contributions to America’s space programs, including innovative planetary missions in support of unmanned exploration of the solar system,” the society said.

“Not only does he possess all the right professional qualifications, but his long-term accomplishments in furthering the exploration of our solar system are truly remarkable, unique and deserving of this recognition,” Jim Kirkpatrick, executive director of the American Astronautical Society, said of Stone.

“This lifetime achievement award is an extraordinary honor,” Stone said.

The award was presented in Washington. It is given every 10 years on the occasion of the society’s anniversary. Previous recipients include Wernher von Braun, a pioneer in rocket development, and William H. Pickering, another former director of JPL.

Stone served as JPL director from 1991 to 2001, during which time a number of new missions were launched, all while Voyager 1 and 2 soared beyond planets and headed toward the boundary of the solar system.

His JPL leadership also coincided with the July 1997 landing of the Mars Pathfinder mission, with its Sojourner rover, on the Red Planet. This marked the first successful arrival of a roving vehicle on Mars.

After stepping down as JPL director, Stone continued his leadership role with Voyager. In 2012, Voyager 1 made history as the first probe to cross into interstellar space, leaving the “bubble” around our solar system’s sun and planets known as the heliosphere.

When the probe launched in 1977, “none of us knew how big the bubble was, nor did we know how long spacecraft could last,” Stone said.

The Voyager spacecraft were built and continue to be operated by NASA's Jet Propulsion Laboratory, in Pasadena, California. Caltech manages JPL for NASA. The Voyager missions are a part of NASA's Heliophysics System Observatory, sponsored by the Heliophysics Division of the Science Mission Directorate at NASA Headquarters in Washington.