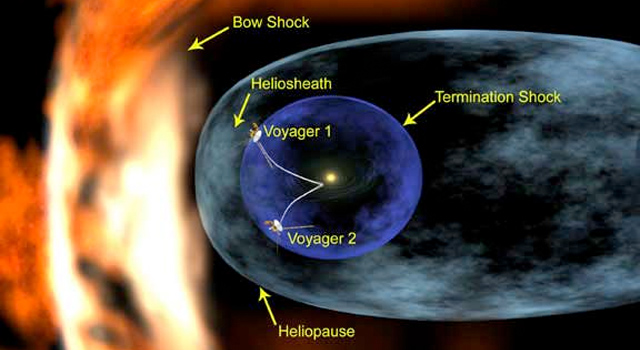 This artist's rendering depicts NASAs Voyager 2 spacecraft as it studies the outer limits of the heliosphere - a magnetic 'bubble' around the solar system that is created by the solar wind. Image credit: NASA/JPL-Caltech.

NASA's venerable Voyager 1 spacecraft, built and operated by NASA's Jet Propulsion Laboratory, Pasadena, Calif., is about to make history again. It is the first spacecraft to enter the solar system's final frontier, a vast expanse where wind from the Sun blows hot against thin gas between the stars: interstellar space.

However, before it reaches this region, Voyager 1 must pass through the termination shock, a violent zone that is the source of beams of high-energy particles. Voyager's journey through this turbulent zone will give scientists the first direct measurements of our solar system's unexplored final frontier, the heliosheath. Scientists are debating whether this passage has already begun. Two papers about this research are being published in Nature today.

The first paper, by Dr. Stamatios Krimigis of the Johns Hopkins University Applied Physics Laboratory, Laurel, Md., and his team, supports the claim Voyager 1 passed beyond the termination shock. The second paper, by Dr. Frank McDonald of the University of Maryland, College Park, and his team, disputes the claim. A third paper, published October 30 in Geophysical Research Letters by Dr. Leonard Burlaga of Goddard Space Flight Center, Greenbelt, Md., and collaborators, states Voyager 1 did not pass beyond the termination shock.

"Voyager 1 has seen striking signs of the region deep in space where a giant shock wave forms, as the wind from the Sun abruptly slows and presses outward against the interstellar wind. The observations surprised and puzzled us, so there is much to be discovered as it begins exploring this new region at the outer edge of the solar system," said Dr. Edward Stone, Voyager project scientist at the California Institute of Technology in Pasadena.

Launched on September 5, 1977, Voyager 1 explored the giant planets Jupiter and Saturn before being tossed out toward deep space by Saturn's gravity. It is approaching, and may have temporarily entered, the region beyond termination shock. At more than 13 billion kilometers (approximately eight billion miles) from the Sun, Voyager 1 is the most distant object from Earth built by humanity.

From about August 1, 2002 to February 5, 2003, scientists noticed unusual readings from the two energetic particle instruments on Voyager 1, indicating it had entered a region of the solar system unlike any previously encountered. This led some to claim Voyager 1 may have entered a transitory feature of the termination shock.

"We have used an indirect technique to show the solar wind slowed down from about 700,000 miles per hour to much less than 100,000 mph. We used this same technique when the instrument measuring the solar wind speed was still working. The agreement between the two measurements was better than 20 percent in most cases," Krimigis said.

"The analysis of the Voyager 1 magnetic field observations in late 2002 indicate that it did not enter a new region of the distant heliosphere by having crossed the termination shock. Rather, the magnetic field data had the characteristics to be expected based upon many years of previous observations, although the intensity of energetic particles observed is unusually high," Burlaga said.

Voyagers 1 and 2 were built by JPL, which continues to operate both spacecraft 26 years after their launch.  The spacecraft are controlled and their data returned through NASA's Deep Space Network, a global spacecraft tracking system also operated by JPL. The Voyager Project Manager is Ed Massey of JPL. For their original missions to Jupiter and Saturn, the Voyagers were destined to explore regions of space where solar panels would not be feasible, so each was equipped with three radioisotope thermoelectric generators to produce electrical power for the spacecraft systems and instruments. Still operating in remote, cold and dark conditions 26 years later, the Voyagers owe their longevity to these Department of Energy-provided generators, which produce electricity from the heat generated by the natural decay of plutonium dioxide.

More information about the Voyagers is available at: https://voyager.jpl.nasa.gov/.

For images and animation on the Internet, visit: