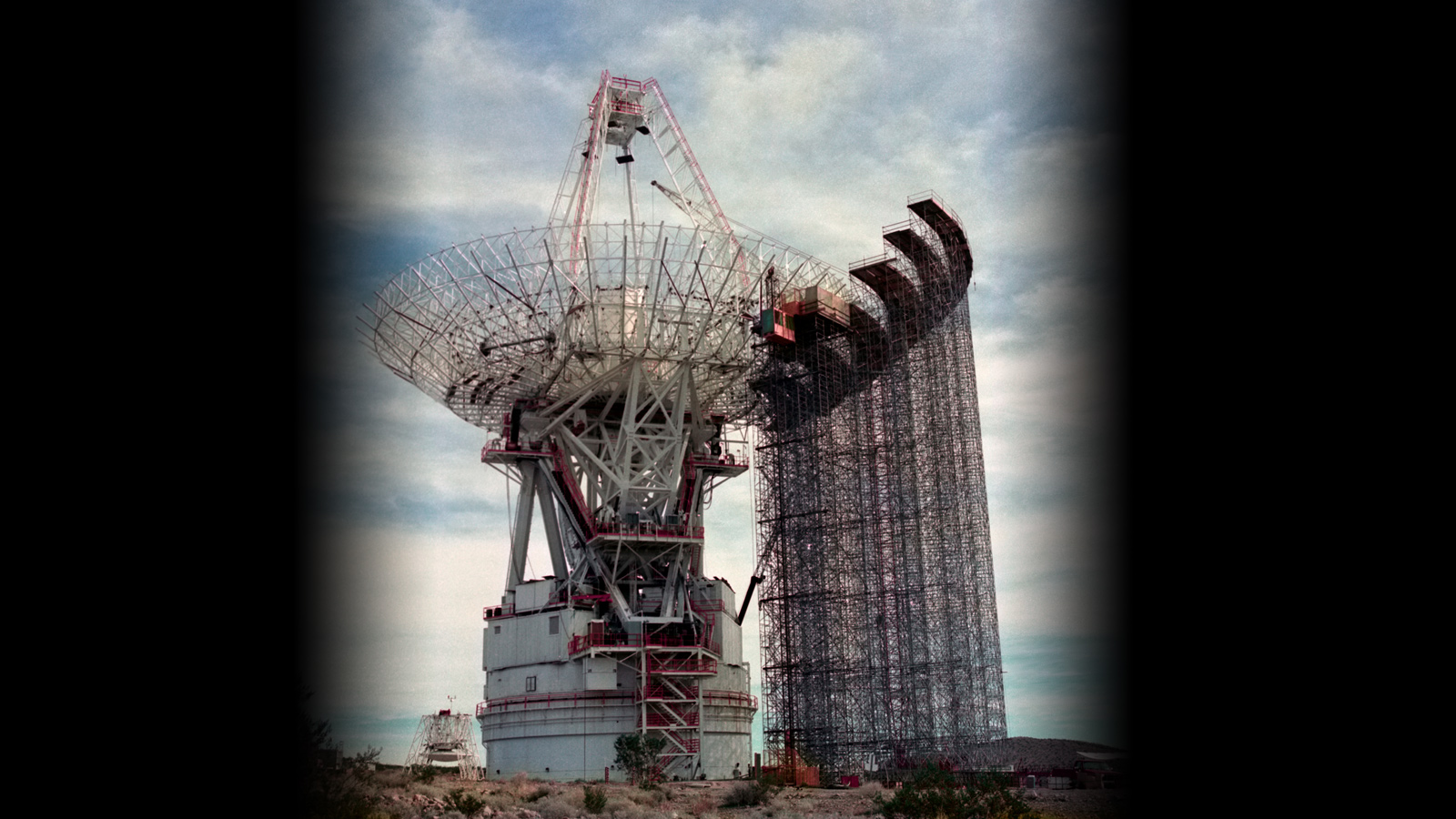 In order to "talk" with the distant Voyager spacecraft, NASA had to leap forward in space communication technology. In the image above, a 64-meter-wide antenna dish in Goldstone, Calif. is expanded to 70 meters. Image Credit: NASA/JPL-Caltech. › larger image

As NASA's twin Voyager spacecraft were changing our understanding of the solar system, they also spurred a leap in spacecraft communications.

The mission's impact is still visible in California's Mojave Desert. There, at NASA's Goldstone Deep Space Communications Complex, the arcs of antenna dishes peek out over craggy hilltops. Goldstone was the first place where the two Voyagers started to change the landscape. The farther they traveled, the bigger these dishes needed to be so they could send and receive radio waves necessary to track and communicate with the probes.

Starting in the 1970s, construction crews built new dishes and expanded old ones. These dishes now tower over the desert: the largest is 230 feet (70 meters) in diameter, a true colossus. Its smaller siblings are 112 feet (34 meters) in diameter, longer than two school buses at their widest points. The dishes had to grow from their original 210 feet (64 meters) and 85 feet (26 meters), respectively.

The expanded dish sizes were mirrored at NASA's other Deep Space Network (DSN) sites, located in Madrid, Spain, and Canberra, Australia. The DSN is managed by NASA's Jet Propulsion Laboratory in Pasadena, California, under the direction of the agency's Space Communication and Navigation (SCaN) Program.

The Voyager mission helped drive this evolution. Today, the Voyagers are more than 10 billion miles from Earth, and Voyager 1 has gone past the heliosphere -- the bubble containing the Sun, the planets and the solar wind. The vast distances between the probes and Earth have required bigger and better "ears" with which to hear their increasingly faint signals.

"In a sense, Voyager and the DSN grew up together," said Suzanne Dodd of JPL, director of the Interplanetary Network Directorate and Voyager's project manager since 2010. "The mission was a proving ground for new technology, both in deep space as well as on Earth."

The DSN was formally founded in 1963, with hardware and personnel that matched the early needs of NASA. The Apollo missions; the Viking program's exploration of Mars; the Pioneer and Mariner probes: all of these relied on the DSN's radio antennas.

But by the late 1970s, the network was undergoing a number of rapid changes. Besides expanding dish sizes, NASA was also exploring the concept of arraying antennas, said Marie Massey, Goldstone's business manager. By pointing multiple antennas toward the Voyager spacecraft, operators could boost their signal, giving them the strength of one giant antenna.

"The DSN proved the concept," said Massey, who began working as a Goldstone station operator in 1978.

Arrays were also carried out at the DSN's other sites in Madrid and Canberra. It would take several antennas at each of the DSN's sites to collect Voyager 2's images of Uranus in 1986 -- and create the first array for a planetary encounter in deep space communications.

Three years later, Voyager 2 encountered Neptune -- which required more changes. The signal was so faint that the arrays used in 1986 weren’t enough. NASA completed the expansions of the DSN's 230-foot dishes just before the flyby, adding an extra signal boost.

"Today, space agencies borrow antennas routinely to help each other, something which began with Voyager," said Leslie Deutsch of JPL, deputy director of the Interplanetary Network Directorate. Deutsch helped research how to perform NASA's first arrays and how to incorporate the non-DSN antennas into that work.

Arrays using these massive antennas are still vital to the Voyager mission's distant signals. The transmitter on each of the Voyagers is just strong enough to power an ordinary refrigerator light bulb. By the time those signals reach Earth, they're one-tenth of a billionth-trillionth of a watt.

There were other changes to the DSN, too. A JPL-designed telemetry system would alter the way data were transmitted. The Voyagers were the first spacecraft to use the Reed-Solomon error-correcting code, which increased their data rate.

All of this made it easier for the Voyagers to make new discoveries and send back iconic images like "the family portrait." But they also meant the DSN itself was changing: It was evolving for a new space age, one in which exploration was rich and frequent.

"We've gone from one primary planetary mission to investigating many locations in our solar system at the same time," Dodd said.

For more information about the Deep Space Network, visit: