When Voyager 1 signals NASA, which it does almost every day, there's usually not much to report. The spacecraft is nearly 9 billion miles (14.5 billion km) from the sun, at the edge of our solar system. It's quiet out there, dark and uneventful. 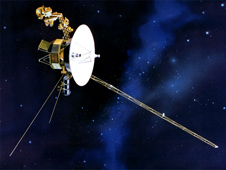 A solar blast wave is heading for the spacecraft, and "it could arrive at any moment," says Ed Stone, project scientist for the Voyager mission at the Jet Propulsion Laboratory.

Remember the solar storms of October and November 2003? Giant sunspots unleashed some of the most powerful flares in recorded history; the explosions hurled billion-ton clouds of gas, called coronal mass ejections (CMEs), into the solar system. When the CMEs reached Earth, auroras appeared as far south as Florida, and our planet gained a new radiation belt that persisted for weeks.

Almost a year later, people are still talking about what happened. Well the storm isn't over. Clouds spit out by the sun during those historic weeks have been traveling through the solar system ever since, and they're about to overtake Voyager 1.

Other spacecraft have already been hit.

On Oct. 28, 2003, a CME swept past Mars Odyssey, in Mars orbit. Intense radiation disabled one of the craft's science instruments, the Martian Radiation Environment Experiment (MARIE), designed, ironically, to study solar storms and space radiation. In the weeks that followed, CMEs buffeted Ulysses near Jupiter, and Cassini on its way to Saturn. Neither spaceship was harmed.

"The blast wave was powerful enough to spark a magnetic storm all the way out at Saturn, almost ten times farther from the sun than Earth. That's impressive," marvels Stone.

October. November. December. "The CMEs kept traveling outward," says Stone. January. February. March. "Some of the CMEs merged, the faster clouds having scooped up the slower ones." April. "The shock wave hit Voyager 2." 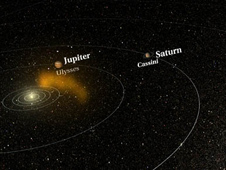 An artist's concept of the blast wave traveling outward through the solar system. › larger image

Voyager 1 and 2 are the most distant spacecraft in the solar system. They left Earth in the late 1970's, visited Jupiter and Saturn (Voyager 2 also went to Uranus and Neptune), then headed for the stars. Voyager 2 is now 7 billion miles from Earth, and Voyager 1 is almost 9 billion miles away.

Soon these spacecraft will reach the edge of the sun's magnetosphere, or "heliosphere," a vast magnetic bubble containing all nine planets. Outside the bubble lies interstellar space. Inside ... the Voyagers are still within range of solar storms.

The shock wave hit Voyager 2 traveling 600 km/s, or 1.3 million mph. (For comparison, CMEs left the sun last October going 1500 to 2000 km/s, "so there has been substantial deceleration," notes Stone.) The physical force was slight, less than the touch of a feather--the spacecraft didn't go tumbling. Neither did radiation cause problems. The storm had diffused over such a great volume by the time it reached Voyager 2, that "no damage was done," says Stone.

In fact, the encounter was good. Voyager 2 measured (indirectly) the speed of the shock, as well as its composition, temperature and magnetism. These data are invaluable, says Stone. Combined with measurements from Mars Odyssey, Ulysses, Cassini and other spacecraft, they show how far-ranging CMEs evolve and dissipate. One day human astronauts will be "out there," and mission planners need to know what to expect.

All that remains is Voyager 1. 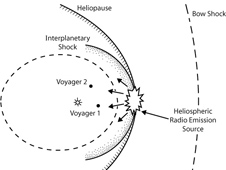 A schematic diagram of the the solar blast wave hitting the edge of the heliosphere. Click to listen to sample radio sounds generated by the collision. › more information

Based on the velocity of the blast wave when it hit Voyager 2, "we expected the shock to reach Voyager 1 on June 26th," says Stone. "We're still waiting." It's possible the wave, irregular in structure, will simply miss Voyager 1.

But it won't miss the edge of the heliosphere--it can't. When the shock wave gets there, Stone says, there might be a 2 to 3 kHz radio burst signaling the impact, akin to the radio emissions Cassini detected when the wave hit Saturn's magnetic field, but at much lower frequencies. Voyager 1 has a receiver on board that can record such bursts and report them to Earth.

That's not all: the blast wave will push the edge of the heliosphere outward as much as 600 million km, Stone believes, and then there will be a rebound. For months the outer layer of the sun's magnetic bubble might slowly sweep back and forth over Voyager 1.

For Stone and his colleagues, who've have been waiting decades for Voyager 1 to reach the outer limits of the solar system, this is an exciting time. Solar shock waves. Radio bursts. The heliosphere itself bulging and rebounding.

It's not so uneventful out there, after all.