The intrepid twin Voyager spacecraft, launched about two weeks apart in the summer of 1977 and now heading out of the solar system, continue making history. On Jan. 5, 2005 the Voyager team noted a milestone with a nice round number: 10,000 days since Voyager 2's launch. On Jan. 21, 2005 Voyager 1 also passed 10,000 days.

Both spacecraft are still going strong and are returning valuable science data. Each Voyagers' cosmic ray detector, magnetometer, plasma wave detector and low-energy charged particle detector all still operational. In addition, the Ultraviolet Spectrometer on Voyager 1 and the Plasma Science instrument on Voyager 2 continue to return data. Both spacecraft are expected to continue to operate and send back valuable data until at least the year 2020. 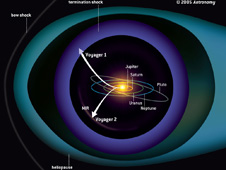 The mission currently employs the equivalent of about 10 full-time people at JPL, significantly less than the approximately 300 during the height of its famed "Grand Tour" of the planets through 1989. Only two veterans of the Voyager launches still work on the flight team. Some of the summer interns the team has employed were not even born when the spacecraft were launched. The project scientist, Dr. Ed Stone of the California Institute of Technology has been with the mission since inception and two original principal investigators - Dr. Stamatios Krimigis of the Applied Physics Laboratory and Dr. Norman Ness of the University of Delaware - remain.

During the journey, the Voyagers flew by Jupiter, Saturn, Uranus and Neptune and returned nearly 80 thousand images and more than 5 trillion bits of data. After traveling through space for more than 27 years, Voyager 1 is now more than 14 billion kilometers (94 AU) from the Sun, heading in a northerly direction toward interstellar space. Voyager 2, closer at about 11 billion kilometers (75 AU), is headed on a southerly path toward interstellar space. Voyager 1 is now the furthest human-made object from the Sun, having surpassed Pioneer 10 on February 17, 1998.

Since the beginning of the Interstellar Mission in 1990, the two spacecraft have returned well more than 65 billion bits of data, though at lower data rates than during the Grand Tour. The data continue to reveal new characteristics of the effects of the sun in the distant solar wind. As an example, a Coronal Mass Ejection (CME) shock wave from the October 2003 solar storms was detected at Voyager 2 in mid-April 2004. Some of the most powerful flares in recorded history hurled billion-ton clouds of gas, called coronal mass ejections (CMEs), into the solar system. By the time the resulting shocks reached Voyager 2, about 6 months later, they had combined into Merged Interaction Regions and had slowed considerably. Traveling at 600 km/sec, it had slowed considerably from the 1500-2000 km/sec detected last Fall as the storms left the Sun. Voyager 2 measured the speed of the shock, its composition, temperature and magnetism. When combined with measurements from SOHO, Mars Odyssey, Ulysses, Cassini and other spacecraft, the Voyager data show how far-ranging CMEs evolve and dissipate.

For the past two years or so, Voyager 1 has detected phenomena unlike any encountered before in all its years of exploration. These observations and what they may infer about the approach to the termination shock have been the subject of on-going scientific debates. While some of the scientist believed that the passage past the termination shock had already begun, some of the phenomena observed were not what would have been expected. So the debate continues while even more data are being returned and analyzed. However, it is certain that the spacecraft are in a new regime of space. The observed plasma wave oscillations and increased energetic particle activity may only be the long-awaited precursor to the termination shock. If we have indeed encountered the termination shock, Voyager 1 would be the first spacecraft to enter the solar system's final frontier, a vast expanse where wind from the Sun blows hot against thin gas between the stars: interstellar space.