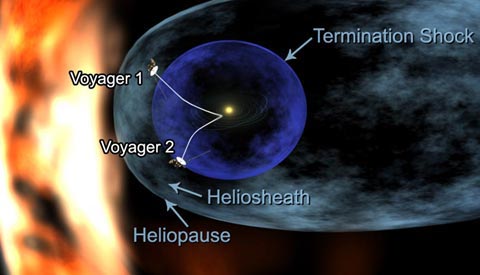 Voyager 2 launched on Aug. 20, 1977, and Voyager 1 launched on Sept. 5, 1977. They continue to return information from distances more than three times farther away than Pluto.

"The Voyager mission is a legend in the annals of space exploration. It opened our eyes to the scientific richness of the outer solar system, and it has pioneered the deepest exploration of the sun's domain ever conducted," said Alan Stern, associate administrator for NASA's Science Mission Directorate, Washington. "It's a testament to Voyager's designers, builders and operators that both spacecraft continue to deliver important findings more than 25 years after their primary mission to Jupiter and Saturn concluded."

During their first dozen years of flight, the Voyagers made detailed explorations of Jupiter, Saturn, and their moons, and conducted the first explorations of Uranus and Neptune. The Voyagers returned never-before-seen images and scientific data, making fundamental discoveries about the outer planets and their moons. The spacecraft revealed Jupiter's turbulent atmosphere, which includes dozens of interacting hurricane-like storm systems, and erupting volcanoes on Jupiter's moon Io. They also showed waves and fine structure in Saturn's icy rings from the tugs of nearby moons.

For the past 18 years, the twin Voyagers have been probing the sun's outer heliosphere and its boundary with interstellar space. Both Voyagers remain healthy and are returning scientific data 30 years after their launches.

Voyager 1 currently is the farthest human-made object, traveling at a distance from the sun of about 15.5 billion kilometers (9.7 billion miles). Voyager 2 is about 12.5 billion kilometers (7.8 billion miles) from the sun. Originally designed as a four-year mission to Jupiter and Saturn, the Voyager tours were extended because of their successful achievements and a rare planetary alignment. The two-planet mission eventually became a four-planet grand tour. After completing that extended mission, the two spacecraft began the task of exploring the outer heliosphere.

"The Voyager mission has opened up our solar system in a way not possible before the Space Age," said Edward Stone, Voyager project scientist at the California Institute of Technology, Pasadena, Calif. "It revealed our neighbors in the outer solar system and showed us how much there is to learn and how diverse the bodies are that share the solar system with our own planet Earth."

In December 2004, Voyager 1 began crossing the solar system's final frontier. Called the heliosheath, this turbulent area, approximately 14 billion kilometers (8.7 billion miles) from the sun, is where the solar wind slows as it crashes into the thin gas that fills the space between stars. Voyager 2 could reach this boundary later this year, putting both Voyagers on their final leg toward interstellar space.

Each spacecraft carries five fully functioning science instruments that study the solar wind, energetic particles, magnetic fields and radio waves as they cruise through this unexplored region of deep space. The spacecraft are too far from the sun to use solar power. They run on less than 300 watts, the amount of power needed to light up a bright light bulb. Their long-lived radioisotope thermoelectric generators provide the power.

"The continued operation of these spacecraft and the flow of data to the scientists is a testament to the skills and dedication of the small operations team," said Ed Massey, Voyager project manager at NASA's Jet Propulsion Laboratory in Pasadena, Calif. Massey oversees a team of nearly a dozen people in the day-to-day Voyager spacecraft operations.

The Voyagers call home via NASA's Deep Space Network, a system of antennas around the world. The spacecraft are so distant that commands from Earth, traveling at light speed, take 14 hours one-way to reach Voyager 1 and 12 hours to reach Voyager 2. Each Voyager logs approximately 1 million miles per day.

Each of the Voyagers carries a golden record that is a time capsule with greetings, images and sounds from Earth. The records also have directions on how to find Earth if the spacecraft is recovered by something or someone.

NASA's latest outer planet exploration mission is New Horizons, which is now well past Jupiter and headed for a historic exploration of the Pluto system in July 2015.

For a complete listing of Voyager discoveries and mission information, visit the Internet at: