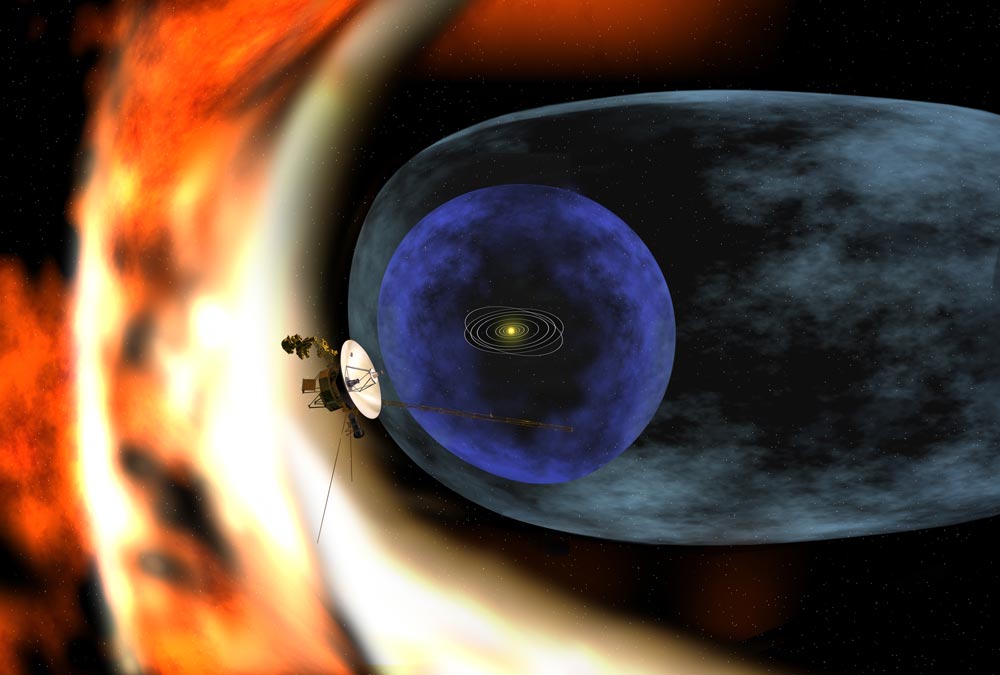 This artist's rendering depicts NASAs Voyager 2 spacecraft as it studies the outer limits of the heliosphere - a magnetic 'bubble' around the solar system that is created by the solar wind. Scientists observed the magnetic bubble is not spherical, but pressed inward in the southern hemisphere, according to recent data published as part of a series of papers in this week's (July 3, 2008) Nature. These findings help build up a picture of how the sun interacts with the surrounding interstellar medium.

Scientists using data from NASA's Voyager 2 spacecraft have observed the bubble of solar wind surrounding the solar system is not round, but has a squashed shape, according to recent data published as part of a series of papers in this week's (July 3) Nature.

The beginning of the transition zone between the heliosphere (the solar wind bubble) and the rest of interstellar space is known as the 'termination shock'. Scientists report that Voyager 2 crossed this boundary closer to the sun than expected, suggesting that the heliosphere in this region is pushed inward, closer to the sun, by an interstellar magnetic field. These findings help build up a picture of how the sun interacts with the surrounding interstellar medium.

Launched in 1977, two Voyager spacecraft were originally sent to fly by and observe Jupiter and Saturn. Voyager 1's flight path at Saturn bent it up and away from the ecliptic, the plane in which most planets orbit the sun. Voyager 2's trajectory continued in the ecliptic, allowing the spacecraft two more planetary encounters, the distant planets Uranus and then Neptune. The Voyager spacecraft are the most distant human-made objects in space -- with Voyager 1 more distant than Voyager 2.

The current mission of Voyager 2, and its sister Voyager 1, is to reach the edge of interstellar space.