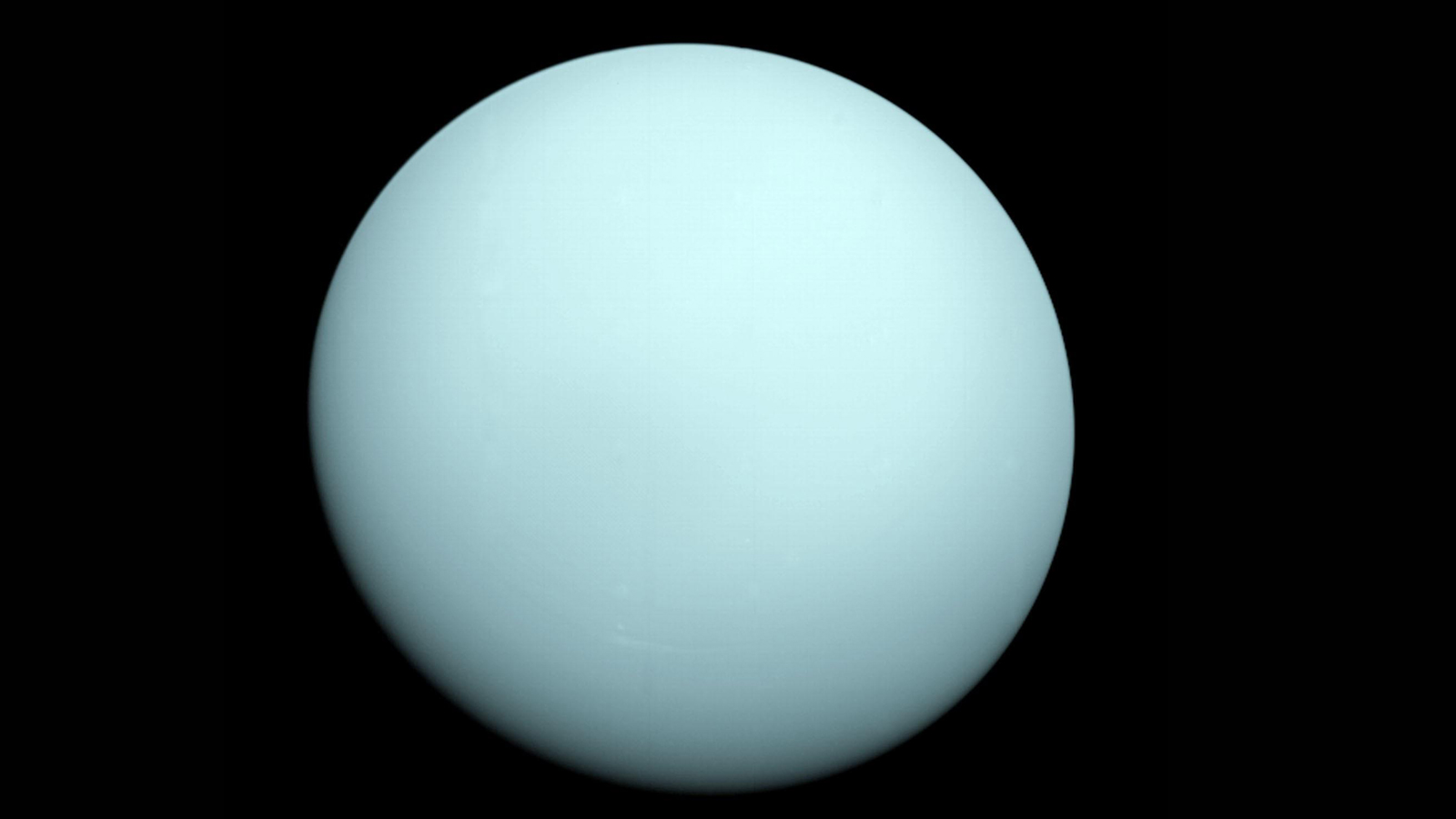 Voyager 2 took this image as it approached the planet Uranus on Jan. 14, 1986. The planet's hazy bluish color is due to the methane in its atmosphere, which absorbs red wavelengths of light. Credit: NASA/JPL-Caltech
› Full image and caption

Eight and a half years into its grand tour of the solar system, NASA's Voyager 2 spacecraft was ready for another encounter. It was Jan. 24, 1986, and soon it would meet the mysterious seventh planet, icy-cold Uranus.

Over the next few hours, Voyager 2 flew within 50,600 miles (81,433 kilometers) of Uranus' cloud tops, collecting data that revealed two new rings, 11 new moons and temperatures below minus 353 degrees Fahrenheit (minus 214 degrees Celsius). The dataset is still the only up-close measurements we have ever made of the planet.

Unbeknownst to the entire space physics community, 34 years ago Voyager 2 flew through a plasmoid, a giant magnetic bubble that may have been whisking Uranus' atmosphere out to space. The finding, reported in Geophysical Research Letters, raises new questions about the planet's one-of-a-kind magnetic environment.

Planetary atmospheres all over the solar system are leaking into space. Hydrogen springs from Venus to join the solar wind, the continuous stream of particles escaping the Sun. Jupiter and Saturn eject globs of their electrically-charged air. Even Earth's atmosphere leaks. (Don't worry, it will stick around for another billion years or so.)

The effects are tiny on human timescales, but given long enough, atmospheric escape can fundamentally alter a planet's fate. For a case in point, look at Mars.

"Mars used to be a wet planet with a thick atmosphere," said Gina DiBraccio, space physicist at NASA's Goddard Space Flight Center and project scientist for the Mars Atmosphere and Volatile Evolution, or MAVEN mission. "It evolved over time" - 4 billion years of leakage to space - "to become the dry planet we see today."

Atmospheric escape is driven by a planet's magnetic field, which can both help and hinder the process. Scientists believe magnetic fields can protect a planet, fending off the atmosphere-stripping blasts of the solar wind. But they can also create opportunities for escape, like the giant globs cut loose from Saturn and Jupiter when magnetic field lines become tangled. Either way, to understand how atmospheres change, scientists pay close attention to magnetism.

That's one more reason Uranus is such a mystery. Voyager 2's 1986 flyby revealed just how magnetically weird the planet is.

"The structure, the way that it moves ... ," DiBraccio said, "Uranus is really on its own."

Unlike any other planet in our solar system, Uranus spins almost perfectly on its side - like a pig on a spit roast - completing a barrel roll once every 17 hours. Its magnetic field axis points 60 degrees away from that spin axis, so as the planet spins, its magnetosphere - the space carved out by its magnetic field - wobbles like a poorly thrown football. Scientists still don't know how to model it.

This oddity drew DiBraccio and her coauthor Dan Gershman, a fellow Goddard space physicist, to the project. Both were part of a team working out plans for a new mission to the "ice giants" Uranus and Neptune, and they were looking for mysteries to solve.

So they downloaded Voyager 2's magnetometer readings, which monitored the strength and direction of the magnetic fields near Uranus as the spacecraft flew by. With no idea what they'd find, they zoomed in closer than previous studies, plotting a new datapoint every 1.92 seconds. Smooth lines gave way to jagged spikes and dips. And that's when they saw it: a tiny zigzag with a big story.

"Do you think that could be ... a plasmoid?" Gershman asked DiBraccio, catching sight of the squiggle.

Little known at the time of Voyager 2's flyby, plasmoids have since become recognized as an important way planets lose mass. These giant bubbles of plasma, or electrified gas, pinch off from the end of a planet's magnetotail - the part of its magnetic field blown back by the Sun like a windsock. With enough time, escaping plasmoids can drain the ions from a planet's atmosphere, fundamentally changing its composition.

They had been observed at Earth and other planets, but no one had detected plasmoids at Uranus - yet.

DiBraccio ran the data through her processing pipeline, and the results came back clean. "I think it definitely is," she said.

The plasmoid DiBraccio and Gershman found occupied a mere 60 seconds of Voyager 2's 45-hour-long flight by Uranus. It appeared as a quick up-down blip in the magnetometer data. "But if you plotted it in 3D, it would look like a cylinder," Gershman said.

Comparing their results to plasmoids observed at Jupiter, Saturn and Mercury, they estimated a cylindrical shape at least 127,000 miles (204,000 kilometers) long, and up to roughly 250,000 miles (400,000 kilometers) across. Like all planetary plasmoids, it was full of charged particles - mostly ionized hydrogen, the authors believe.?

Readings from inside the plasmoid - as Voyager 2 flew through it - hinted at its origins. Whereas some plasmoids have a twisted internal magnetic field, DiBraccio and Gershman observed smooth, closed magnetic loops. Such loop-like plasmoids are typically formed as a spinning planet flings bits of its atmosphere to space. "Centrifugal forces take over, and the plasmoid pinches off," Gershman said. According to their estimates, plasmoids like that one could account for between 15% and 55% of atmospheric mass loss at Uranus, a greater proportion than either Jupiter or Saturn. It may well be the dominant way Uranus sheds its atmosphere to space.

How has plasmoid escape changed Uranus over time? With only one set of observations, it's hard to say.

"Imagine if one spacecraft just flew through this room and tried to characterize the entire Earth," DiBraccio said. "Obviously it's not going to show you anything about what the Sahara or Antarctica is like."

But the findings help focus new questions about the planet. The remaining mystery is part of the draw. "It's why I love planetary science," DiBraccio said. "You're always going somewhere you don't really know."

The twin Voyager spacecraft were built by and continue to be operated by NASA's Jet Propulsion Laboratory. JPL is a division of Caltech in Pasadena. The Voyager missions are a part of the NASA Heliophysics System Observatory, sponsored by the Heliophysics Division of the Science Mission Directorate in Washington.